It's been more than a year I wrote something on this page. I can't really overcome my laziness these days to write. Anyway, I don't read more often neither I am a good writer and struggling while writing is common among all such folks.

I bought my first bike/motorcycle in September 2015. Before that, I did not have any driving experience. Fast forward one year, my bikes (broken yet functioning) meter reading now shows 9000 KMs. I understand it is very  less to call myself a good driver but in last year I got to know how to drive as a newbie. Today I wish pen down experiences about driving or specifically how not to drive rather than how to drive a bike on Indian roads.

Pune is the city known for its very high ratio of motorcycles to the population. City infrastructure, majority middle-class population and adding to it worst public transport system bikes became the most preferred mode of travelling. You will see all sort of crazy bikers in Pune. Uncles who used ride cycles but switched to bike long back, 'Puneri Mulgi's in their Ninja all covered in scarf and 60 degree inclined landing gears on ground, the college goers and IT dudes aggressively waiting for green as if they are supposed to join 3rd world war and calm, detached 100-150 cc married person occasionally carrying family or travelling to office. These are my experiences in Pune but same can be relatable in other cities as well.

Coming to the point, I personally think riding two wheeler/bike/motorcycle is inherently very risky. It is very very likely that a minute accident costs a life. The advent of scooters especially scooters with 125+ cc segment makes them much risk-prone because of technicalities involved. Geared bike is relatively safer because of having extra control on speed using gears and large wheel size gives gyroscopic stability. We, in India are a populous country with inadequate resources and our old mentality of being ignorant to traffic rules makes it very likely that something wrong will happen even if you are too good at driving. And then there are 'Amir baap ke bighade bete' driving as if their dad owns road caring less people about people driving alongside. On an average, more than 150 people die in a city like Pune. More than 90% of the people were driving helmetless. The conclusion being things happen even if they are least expected.

Given all those facts, you as a newbie rider should give up on riding? No!. Riding bike is fund. Four wheels move the body, two wheels move the soul. Also, believe me, owning a bike increase convenience to a great extent. There are lots of things which you can do if you have a bike which you can't do without it. So, let's learn as a newbie. Here are few things I followed. Please let me know your
observations and feel free to disagree.

Your brother, dad, friend anyone can be your mentor. Practice on the ground before you hit roads. This is very obvious but never drive directly on roads. Also, there are a lot of driving schools who do teach two wheeler riding in Pune.

More than 90% bikes who died last year in Pune were not wearing helmets. So if you wear one, the probability of getting killed decreases by a huge margin.

3. Rule number 3, there are no rules for others!

Do not depend on the fact that people will always follow rules. Be vigilant. Even if you know you are following rules, double check if other are following and will they damage you.

4. Always use rear view mirrors and side indicators.

Keep checking rear view mirrors to see approaching vehicles. Do not take turns without confirming if anyone is approaching from the rear. This can save a life.

5. Do not change lane abruptly.

Keep driving but don't suddenly stop in between or change lane abruptly. If you wish to move to different lane, always use indicators and slowly move after confirming no one is approaching from the rear.

6. Slow down if in confusion.

7. Use brake and clutch wisely.

Do not use clutch while braking or turning. It disengages gears from engine and vehicle moves freely making it less stable.

8. Do not drive extreme left or right. The somewhat middle is preferable.

The majority of action actually happens on the extreme left, from where people try to get in and extreme right where people drive fast. So as a newbie when you speed is not too high, drive in the middle area toward the slight left.

These are very unpredictable folks. They can move anywhere anytime resulting in an accident. Use horns to alert them. Dogs or in general, animals have created so many accidents.

Environmentalist, I understand sound pollution. But life is more valuable. Blow when you are overtaking, when you passing by a car (sudden door opening), when crossing signal to let people know you wish to move first, to let people know hold on I am going first.

11. Don't overtake from the left. At least as a newbie.

Agree overtaking from the left cannot be avoided sometimes but I would say avoid till you understand possible hazards.

12. Be careful on slippery surface, surface joins with different heights(middle or sideways of road), gravel stones on road, oil spillage.

These are very prone to slipping. Slow down, don't apply sudden brakes and try to remain vertical.

13. Do not take pillion riders till you learn descent enough.

Committed folks, I understand the pain but riding pillion has lot different vehicle dynamics than riding alone. Avoid till you learn well.

Speeding is not a skill, skill is to control speed when something unexpected happens. So relax hold the adrenaline rush, riding slow and enjoying nature is fun too.

There is no alternative other than actual practice. So keep in mind some things and practise. You will be expert in no time.

I will update the blog as and when I get time. Till then enjoy riding and welcome to the club :)

Posted by Aniket Argade at 4:31 AM No comments:

Hey friends!
Most of us might have seen the movie 21. Do you remember the scene when professor asks Ben the puzzle. Don't remember? No worries! YouTube is there. ;)

Pretty cool! Isn't it? We all studied probability in schools and some people might have studied in colleges but its applications are simply awesome. When I first saw it I didn't get how this exactly happens but then I google the famous problem 'Monty Hall Problem'. And I found this really nice video explaining it.

Stay connected for more interesting stuff.
Have a geeky weekend ahead! :)

Posted by Aniket Argade at 9:10 AM No comments:

A Sunday at Delhi Haat

A Sunday at Delhi Haat

The Delhi Haat provides the ambiance of a traditional Rural Haat or village market, but one suited for more contemporary needs. Here one sees a synthesis of crafts, food and cultural activity. This Food and Craft Bazaar is a treasure house of Indian culture, handicrafts and ethnic cuisine, A unique bazaar, in the heart of the city, it displays the richness of Indian culture on a permanent basis. Step inside the complex for an altogether delightful experience by either buying inimitable ethnic wares, savouring the delicacies of different states or by simply relaxing in the evening with the entire family. Some of the very famous delicacies are momos from Sikkim or Bamboos hot chicken from Nagaland, Kahwa & Kebabs from Jammu, Puranpoli from Maharashtra or Gujarati Dhokla.

It was lazy Sunday morning when I went to this place. I took 20 rupees ticket and at the very entrance saw this guy playing a keyboard. It was an amusing scene! (He is encircled by people but yes you can spot keyboard! :P) 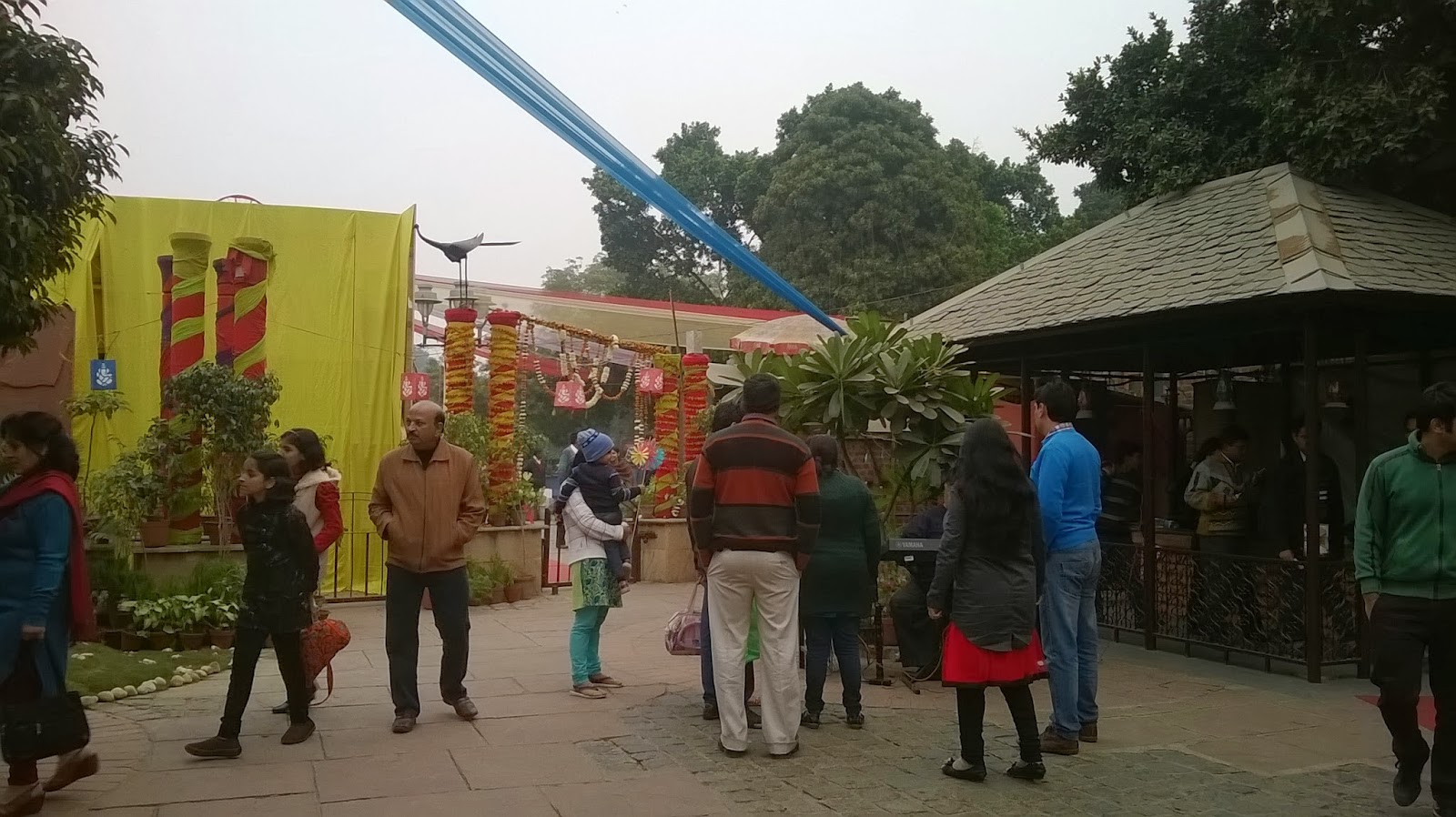 As I went inside there were craftsmen selling stuff who came there from all across the India. I went to one stall selling beautiful artwork. It was the brilliant piece of Madhubani Art from Bihar. Have a look. 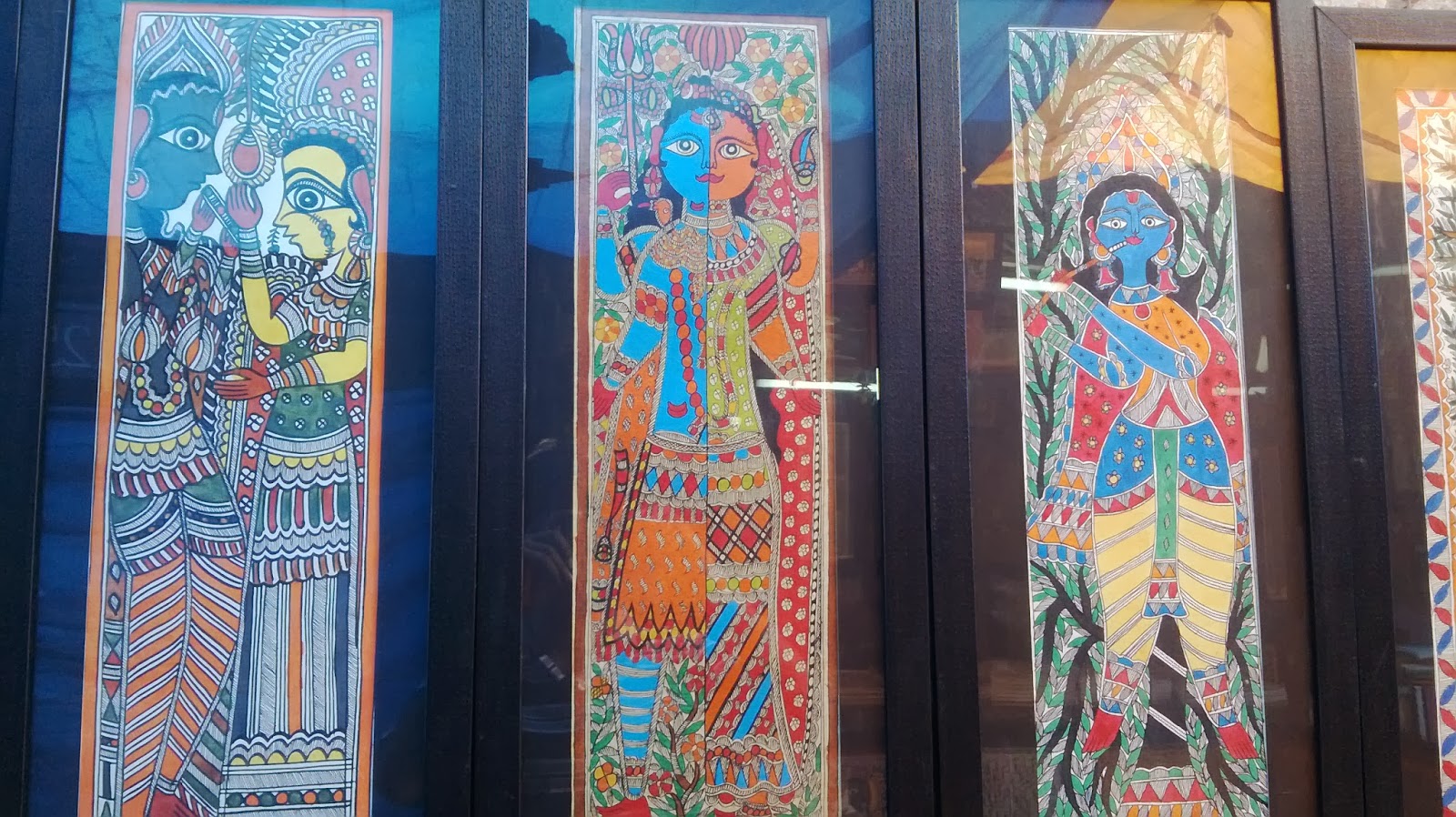 As I went inside I came across food stalls of various states on both sides selling delicacies of respective states. There are Shillong, Maharashtra, Manipur stalls. 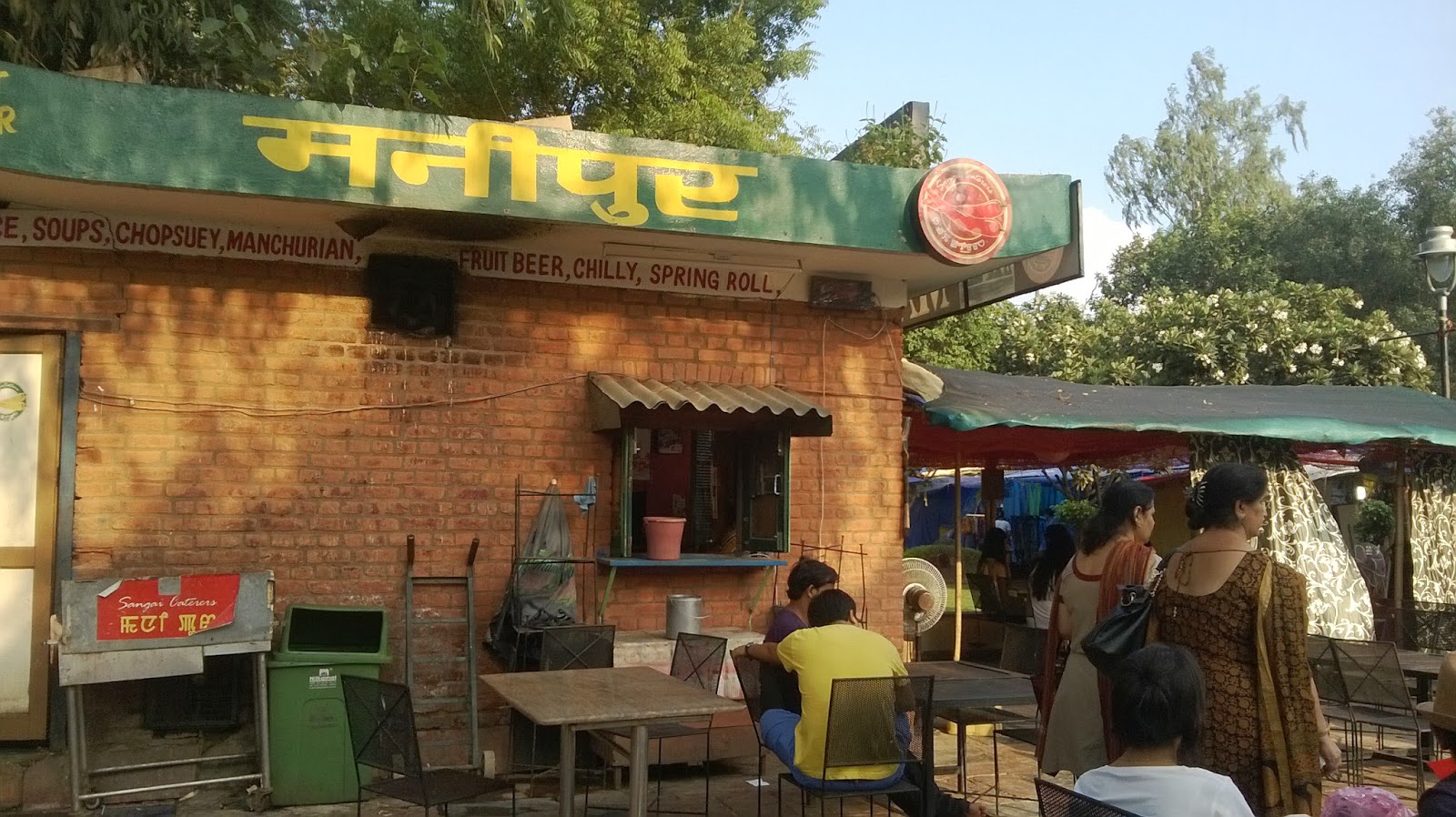 Since I am Maharashtrian, I already had good idea of what Marathi food is all about so I thought to try something else. Being a momos lover I chose Momo mia. This stall is run by north-east community and serves one of the best momos in Delhi. Here is Zomato link to Momo Mia! Unlike all the places in Delhi here we can get fried momos which I think lot better than steamed ones. Here are the pictures of Momo Mia. 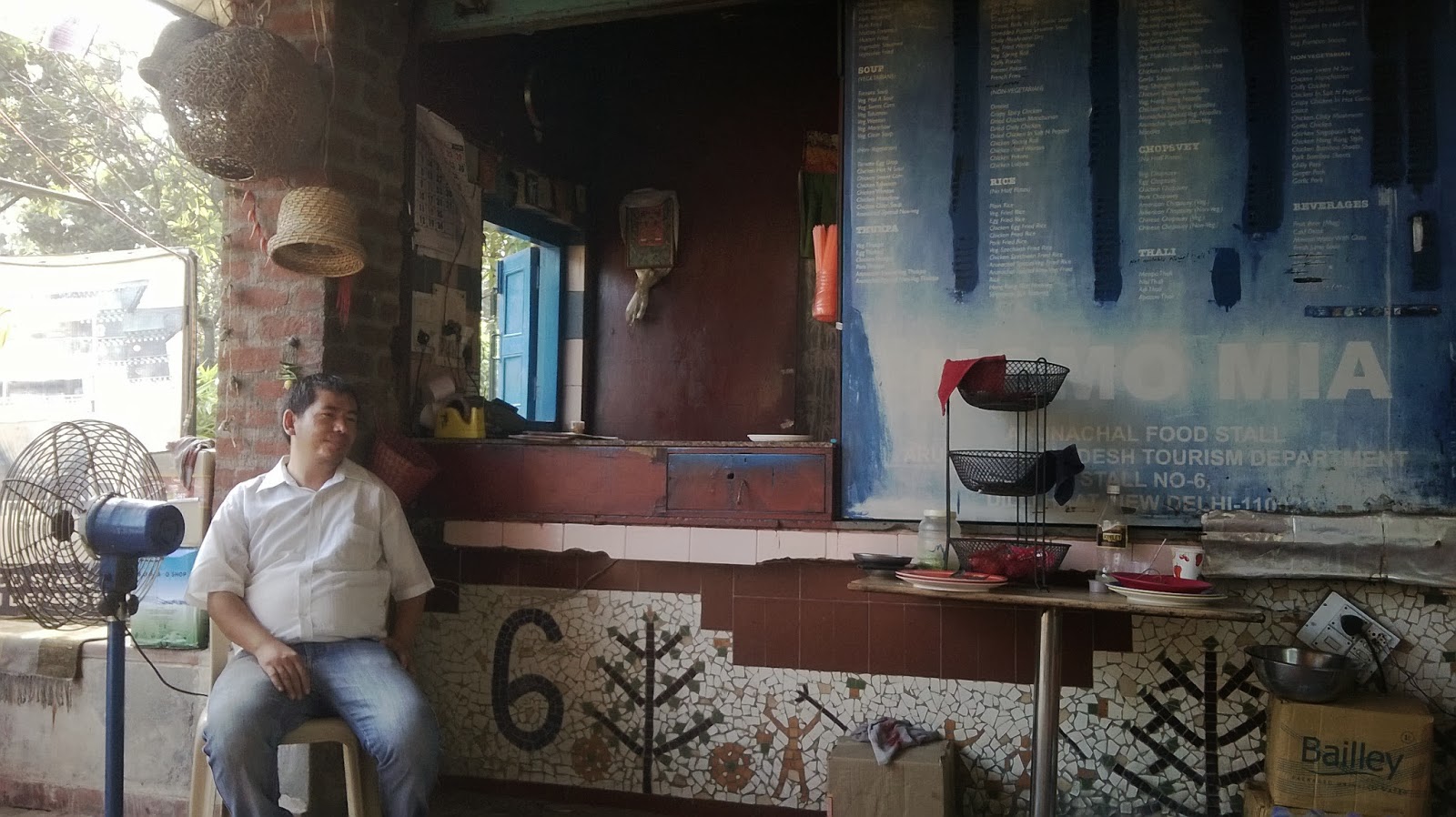 After a look at menu I chose chicken fried momos and fruit beer, which kinda look like this. The soup, fruit beer were as good as momos. 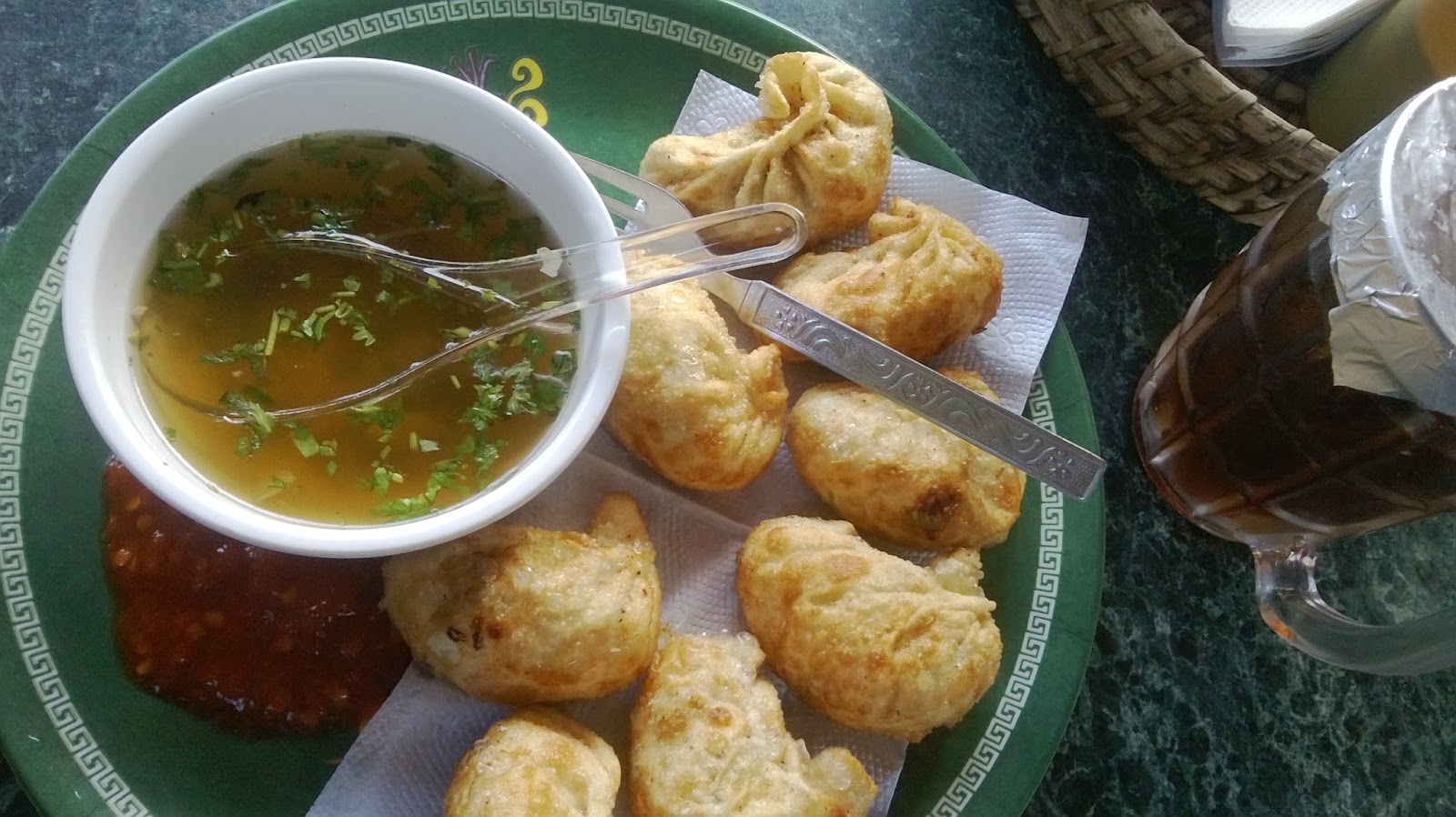 So next you are travelling by Yellow Line of Delhi Metro, get off at INA and try this place! :)
Posted by Aniket Argade at 8:22 AM No comments:


I am Aniket. Mechanical Engineer by education, Software Engineer by profession. I'm here to share whatever interesting that come across me in day-to-day life. It can be anything! Travelling, food, movie reviews or random roadside tapri! The world around us is full of chaos and in our busy lives, we miss the many those sides of life. I will try to capture those things!

So here we go! My first post.
Posted by Aniket Argade at 7:49 AM No comments: